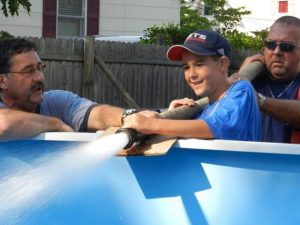 Howell boy gets pool at home through Make-A-Wish foundation

Written by Gina Columbus @ginacolumbusapp
HOWELL— Dakota Schick has been smiling and splashing in the crisp, refreshing water of his new pool.
This doesn’t seem unusual, but the pool was a gift from local pool companies through Make-A-Wish New Jersey, a charity that fulfills the wishes of children with life-threatening illnesses.
Dakota, 10, has been battling a malignant tumor in his thyroid gland for the last six months.
July 25 was Dakota’s lucky day as members of Ramtown Fire Company in two trucks arrived at his home to fill the 18-foot above-ground pool, which had been installed three days before.
“Members of the Ramtown Fire Company were eager to assist in Dakota’s wish,” Bob Nichols, chief of the fire company, said in a prepared statement. “We were very happy to see him surprised and excited as he saw us arrive, and helping him fill his pool was the highlight of the day for all of us.”
The installation was fully funded through in-kind donations from Cayman Pools & Spa in Allentown and Central Jersey Pools in Freehold. Cayman Pools & Spas donated the entire pool package, while Central Jersey Pools donated the ladder with locking enclosure and pool cover, said Lindsey Pritzlaff, director of communications for Make-A-Wish New Jersey.
“The pool took about 30 minutes to fill, but less than 30 seconds for Dakota to jump in,” Pritzlaff said.
Dakota was referred to Make-A-Wish by a social worker at the Children’s Hospital of Philadelphia (CHOP), where he receives treatment for the tumor, Pritzlaff explained. Then his doctors signed off that he was eligible for Make-A-Wish.
Make-A-Wish volunteers met with Dakota and his family to ask him what his fondest wish was. His answer: a pool to swim in.
“It was then that the Make-A-Wish staff began working to turn Dakota’s wish into a reality,” said Pritzlaff, adding that the organization reached out to the Howell community for assistance.
Dakota recently underwent surgery to remove the tumor from his thyroid gland and is receiving follow-up testing and care at CHOP, Pritzlaff said.
And with the excitement over his home’s newest addition, Dakota has one more request: to invite all of his family and friends to a poolside barbecue — one that is cancer free, Pritzlaff said.
Make-A-Wish New Jersey serves children in New Jersey and has granted more than 7,300 wishes since its founding in 1983, according to its website.

Learn More About The Make A Wish Foundation: